Warning: "continue" targeting switch is equivalent to "break". Did you mean to use "continue 2"? in /membri/samcarcagno/blog/wp-content/plugins/wp-markdown/markdownify/markdownify.php on line 299
 Basic Sound Processing with Python – Sam Carcagno's Blog
Facebook
Twitter
Pinterest

This page describes how to perform some basic sound processing functions in Python. We’ll be using the pylab interface, which gives access to numpy and matplotlib, both these packages need to be installed. We’ll also use scipy to import wav files.

Next we read in a wav file. You can download it here 440_sine.wav, it contains a complex tone with a 440 Hz fundamental frequency (F0) plus noise.

the scipy.io.wavfile.read function reads wav files as int16 (for 16-bit wavs) or int32 (for 32-bit wavs), 24-bit wav files are not supported. We can check the type of the sound as follows:

this means that the sound pressure values are mapped to integer values that can range from -2^15 to (2^15)-1. We can convert our sound array to floating point values ranging from -1 to 1 as follows:

The wav file has two channels and 5292 sample points

Unfortunately there is not an immediate way of listening to the sound directly from python. However, if you’re interested in having sound playback from python check out pyalsaaudio (only Linux) or PyAudio.

A time representation of the sound can be obtained by plotting the pressure values against the time axis. However, we need to create an array containing the time points first:

now we can plot the tone 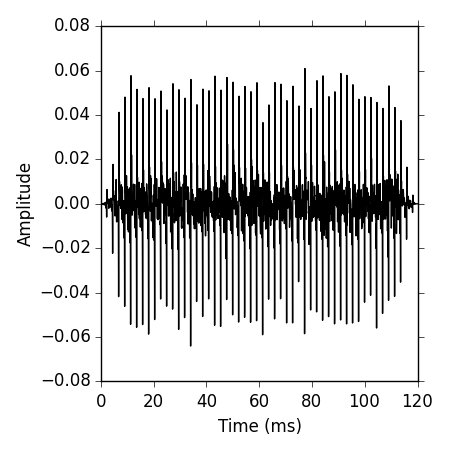 notice that compared to the technical document, we didn’t specify the number of points on which to take the fft, by default then the fft is computed on the number of points of the signal n. Since we’re not using a power of two the computation will be a bit slower, but for signals of this duration this is negligible.

The resulting plot can bee seen below, notice that we’re plotting the power in decibels by taking 10*log10(p), we’re also scaling the frequency array to kilohertz by dividing it by 1000. 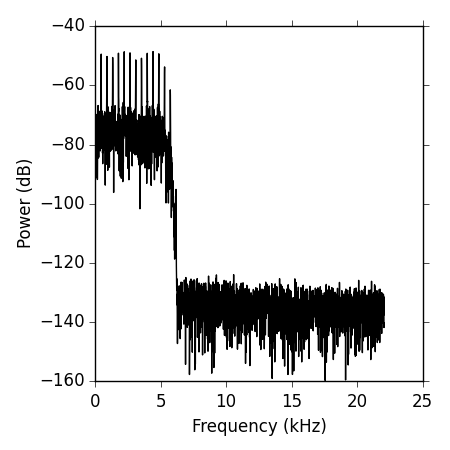 To confirm that the value we have computed is indeed the power of the signal, we’ll also compute the root mean square (rms) of the signal. Loosely speaking the rms can be seen as a measure of the amplitude of a waveform. If you just took the average amplitude of a sinusoidal signal oscillating around zero, it would be zero since the negative parts would cancel out the positive parts. To get around this problem you can square the amplitude values before averaging, and then take the square root (notice that squaring also gives more weight to the extreme amplitude values):

Seamless Theme Keith, made by Altervista

Create a website and earn with Altervista - Disclaimer - Report Abuse